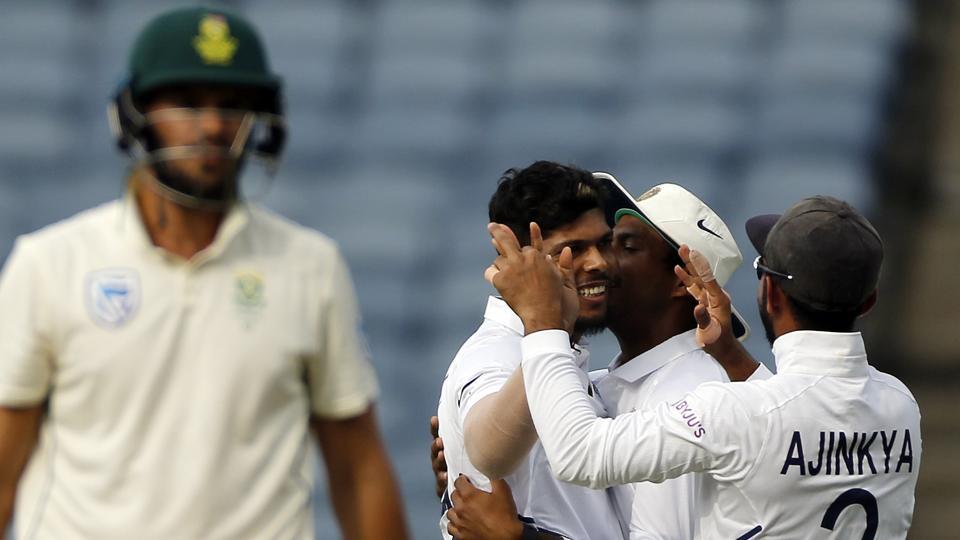 India beat South Africa by an innings and 137 runs in Pune to take unassailable 2-0 lead in the Freedom series, the second test was more or less the same as the first test, to make it worse the game ended well inside 4th day even though the track still remained true for batting till 1st session of 4th days play, so it can be marked again as a one-sided affair.

Though Proteas made a sensible change to their playing 11 with 3 pacer combination, both Philander & Nortje failed to give any support to Rabada on a track that did offer some assistance for quick bowlers when the ball was hard & new. On the other side, their spinners once again failed to impress as they looked flat all along, Day 1 is not the easiest to bowl for them but on Day 2 they still never looked like creating a wicket taking opportunity, something which would have hurt them on a personal level and as a unit. To add more salt to their wound a complete abysmal show from the batting unit made it far too easy for this Indian team to breeze past them to victory. The track offered was perfect due to many reasons. For starters, it had something for the quick bowlers on Day 1 to exploit, it remained true for more than 6 sessions which have enough opportunities for batters to score and even on 4th day the track did not crumble but it started to offer more for spinners which made it an Ideal Subcontinent wicket. The competition between bat & ball was even, Faf & co knows there is no excuse to call for now. In fact, both the test matches were played on balanced pitches by no means they were rank turners.

The only point that will be up for debate would be the toss factor, it again went in favor of the home side. But still, you need to make the most of the given opportunity isn’t it and the Indian team did that by putting up 600 runs on the board. Had th Proteas got the option to bat first they would have done the same? Not certain considering the way they crumbled in both the innings when the pitch did not behave a lot different, but they might have been in the game much longer. Having said that this track by far had no demons to stumble on to an innings defeat, there was lack of intent & application from Faf & co which was shown in both the innings as Maharaj & Philander pair stood apart as an example to show what it takes to play long innings.

At the end of this test match, Virat and his men have lot of positives to take with the likes of Umesh Yadav coming back into the team to hit the ground running with wickets, Saha was outstanding behind the stumps, Jadeja the all rounder looks to have come of ages he has now earned the title to be called as all-rounder, Virat himself got his first 250+ 11 innings due for a hundred he made it a big daddy hundred to shown again what a class act he is and finally the bowling unit is hunting as a pack. This series is not about just Indian spinners running all over with wickets, the pacemen have also equally contributed by chipping in important breakthroughs at the top order with short but firey spells. One area of concern would be cleaning the tail, something Virat will be aware of.

Speaking of South African camp, they will be dejected. There can’t be many positives to look back considering the margin of defeat. But if they want to take something out of the game they can look at Rabada’s spell, not just his wickets but every time he got to bowl he troubled the Indian batsmen. He gave his all unfortunate not to have the support from other end.  The Maharaj&Philander partnership saved them from flat out embarrassment. Away from that, their batting unit looked no better than any Domestic team but the biggest concern was again as a bowling unit struggled & failed to taken 10 wickets to close out the innings this will the biggest concern for Faf. You just don’t win test matches unless you bowl out the opposition.

Any team coming into Indian soil and they allow the host nation to score 450+ in 1st Innings the game is 50% over and they will be chasing the game from thereon. Only salvation from there would be a draw to do so they must have the talent to bad out their skins for long hours, something this South African unit can’t as they lack the experience with talent pool also not looking good enough. Faf did mention during his Post-match press conference about the lack of experience his team is suffering from by losing the like of ABD, Amla, Morkel & Steyn in a year’s time. Indeed it is serious blow as they were the vital clog of their test team for years in contributing big time for their victories in away games in particular. But the bigger concern for them is lack of talent in Domestic circuit to depend on except for Markaram & to some extent Temba though both did not turn up this series apart from them can’t see the much of talent in the horizon. Where are the likes of next ABD’s or Amla’s? One of the main reasons for this is the increasing plage of Kolpak deals in that part of the world.  If this continues the Proteas might also fall behind as cricketing nation the similar way West Indies fell in the last decade and Srilanka in last 5 years. #IndiaVsSouthAfrica #Freedomseries #ViratKohli